My experience attending the Grace Hopper Celebration for the first time. 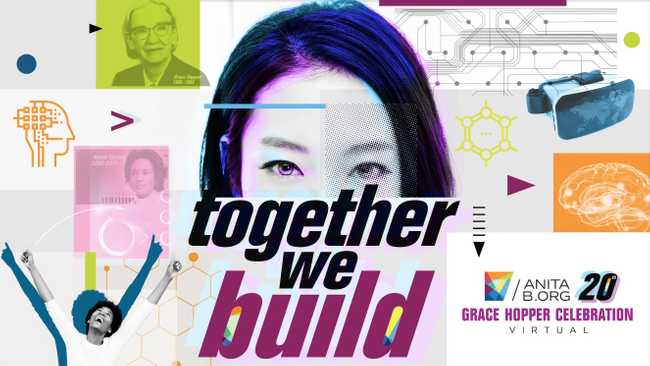 I first heard about the Grace Hopper Celebration (GHC), a celebration for women in computing, from LinkedIn posts circulating when I was still in community college. It was inspiring to read about the experience of women who attended the event. At that time, I did not think that it would be possible for me to attend the event since the ticket is pretty expensive for students like me. It was not until I transferred to UC Irvine that I learned that there are student scholarships for GHC. I immediately applied to the one provided by my school: the ICS-BRAID Scholarship for Grace Hopper. Then August came and I was overjoyed to find out that I was selected as a recipient for the scholarship. Now it's my turn to share my experience of GHC!

Before I start, I will be honest: I was really looking forward to attending GHC physically in Orlando, Florida. I was fascinated by the pictures and videos I read and watched of the event in previous years. It seems fun to meet and connect with other women from various backgrounds. Back in April when I applied to the scholarship, I believed that the current pandemic would be over before September and I would be able to fly to the event. Well, we know how that turned out. I was crushed when I heard that GHC would be virtual this year. My disappointment was further amplified when the organizers announced that they were postponing/canceling the career fair portion just a couple of days before the event started.

That being said, I tried to keep a positive attitude. My school held an orientation and social event for students attending GHC, so I went and got some tips on how to get the best out of the virtual celebration. I looked through all the scheduled workshops and sessions then picked those that really interested me. I also joined the GHC Facebook group where people posted information and opportunities related to the event.

On the first day of GHC, I woke up early in the morning to attend the check-in session for the scholarship recipients. I logged in to the virtual GHC platform and made sure I know where to go for the live stage and sessions. I also checked the recruiting page to see which companies were having their own recruiting session.

The virtual GHC began with an opening keynote by Brenda Wilkerson. She is the President and CEO of Anitab.org, the organization that started GHC. She talked about the problems and struggles women are still having in the technology industry, including gender gap, diversity, and equal pay. 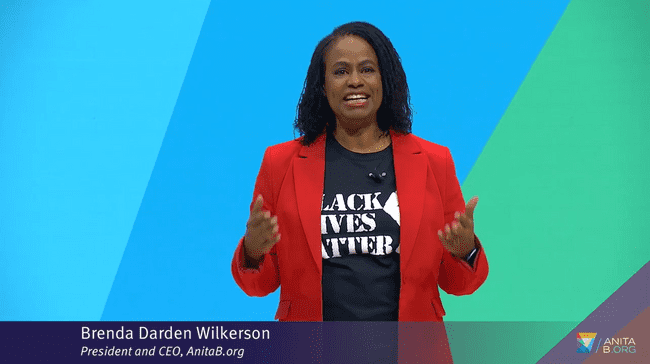 I spent the rest of the day attending presentations. The first one is Lessons Learned in Founding A Meaningful, Thriving Business - So You Can Build Yours Faster by Michelle Zatlyn, the Co-founder and COO of Cloudflare. I'm interested in entrepreneurship and her presentation is super informative! She told her story of building Cloudflare, from when she was still in school until the company went on the New York Stock Exchange. It was truly inspiring to hear her journey. She also gave the audience pointers to start a business. The two tips that I found great are "solve a big, meaningful problem" and "get great people to come work for you".

Another presentation I attended that has a similar entrepreneurship theme was How to Evaluate Startup Ideas by Holly Liu, the co-founder of Kabam. She delved deeper into the business aspect of starting a startup. I think the part that is most useful for me is when she talked about the problem that a startup should solve. She said a good problem should be urgent, valuable, frequent, common, and not already solved.

The last one I attended for the day was An Engineer's Essential Tool in Agile is Design Thinking by two engineers from Intuit. They introduced the concept of "Design For Delight", a user-centered design thinking. You can see the gist of it in the picture below. I love the idea of putting the user first when you are creating or working on something. I can't wait to use this line of thinking when I'm working! 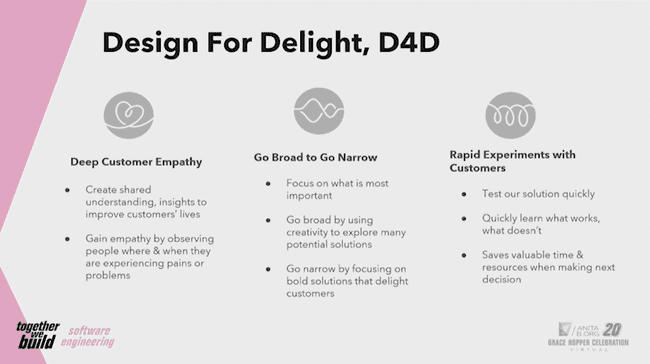 The day ended with another keynote by none other than Serena Williams! I was absolutely amazed by this woman. I also appreciate the fact that she took her time for GHC when she was still busy with the French Open.

I started the day by going to a workshop titled Towards Transparent AI: Understanding Text-Based Model Predictions from Microsoft. I learned about Interpret-text, a package used for natural language processing (NLP). The workshop walked through building a sentiment analysis dashboard that can parse a sentence and let us know if it is a positive or negative sentence. For example, "I'm having a bad day" would be a negative sentence. I definitely gained more knowledge of NLP and increased my interest in machine learning.

Then I attended other presentations and, at the end of the day, the GHC session I couldn't wait to talk about: Coded Bias Screening Watch Party! 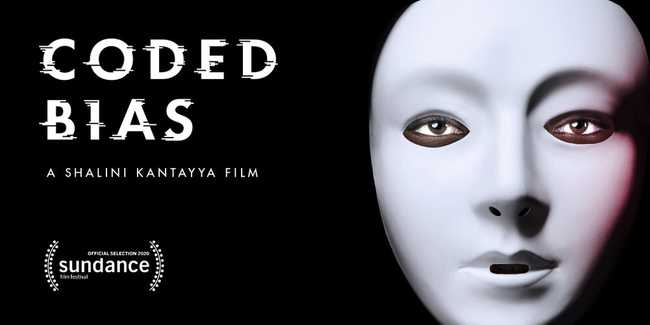 At first, I did not know what the film was going to be about. The film started with the introduction of Joy Buolamwini, a black MIT researcher, and a problem she faced in her computer vision research. She found that the code library she was using couldn't detect her face properly, unless she wore a white mask (as seen in the poster). It was pretty shocking. Then the documentary delves deeper into the topic of ethical AI and the importance of diverse test data. I won't spoil much, but this documentary is definitely a must-watch!

The third day of GHC is special because it's the Open Source Day (OSD)! OSD is an all-day hackathon where all the participants (regardless of skill levels) are encouraged to contribute to various open source projects. As a hackathon enthusiast, of course, I couldn't miss this chance. OSD has multiple tracks usually hosted by sponsors. Unfortunately, since I missed the pre-registration for those tracks, I was placed in the choose-your-own-adventure track. This means that I kind of had to choose the issues I want to solve myself instead of being assigned to one.

I searched the graceHopperOSD tag on GitHub to see if there is an issue I could help with. The first one I found is in the keyboard-shortcuts-practice project by Techtonica, an organization that provides free training for low-income women in the Bay Area. I solved a quick issue they had with optimizing a function and submitted my first pull request for OSD.

I continued my search until I stumbled into a project by She's Coding named projects-platform-frontend. She's Coding is a non-profit organization whose goal is to close the gender gap in tech. They are also one of OSD sponsors and track organizers. The project is a website for women to share their open source projects so they can connect with people who would like to contribute. I thought it was really cool, so I texted them in their OSD's Slack channel to see if I could join since I didn't pre-register. To my surprise, they accepted me and assigned me to a front-end issue. Here is what I worked on: 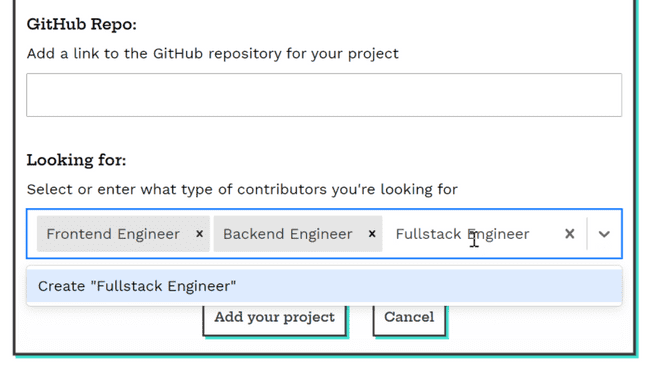 I changed the "Looking For" field from a textbox to an editable multiselect using the react-select package. Pretty cool, right? Here is my pull request if you want to see the GIF I made to show what the feature looks like in action.

I couldn't believe it was the last day of GHC already. For that day, I wanted to focus on joining the mentoring sessions they had. It was... frustrating. They had multiple mentors and each could only accept 20 mentees each round for 3 rounds. I tried to join a session with a topic I'm interested in, but after waiting for 3 rounds, I still couldn't get in. I guess everyone else also wanted to join that session. I wished they have more rounds or mentors.

In the end, I picked the speed mentoring sessions option. The speed sessions were a bit different than the normal ones because they were only 15 minutes and 5 mentees. I got into one by a Microsoft software engineer. First, she introduced herself and gave some interview prep advice. Then she also talked about some life tips she has, including saving money and having hobbies outside of tech so you don't get burned out. While it was really short, at least I gained something from the mentoring portion of GHC.

I spent the rest of the last day watching recordings of the previous days' sessions that I couldn't join. Then it was suddenly the time for the closing keynote. The speaker this time is Megan Rapinoe, captain of the national US women soccer team. She spoke of her experience leading and lifting women in her field. She was truly inspiring and a great ending to the celebration.

And that's my first experience of GHC! There were some parts of the event that I was disappointed with, but overall I certainly learned a lot during the week. I definitely would love to attend this event again, especially if it's in-person. I hope you enjoyed reading my story and consider attending GHC too in the future! 😀

Made with by Nadya